This ensemble cast of Indigenous storytellers delights and entertains audiences with their interactive and family-friendly show. Th’owxiya: The Hungry Feast Dish is the mythical tale of local forest animals, including a mouse, a raven—even a sasquatch, and the show's important messages of taking care of the earth, honor, and friendship are positive, playful, and sure to enchant audiences of all ages.

Th’owxiya is an old and powerful spirit that inhabits a feast dish. Her dish holds beautiful foods from around the world but stealing from her is a dangerous business because Th'owxiya has developed a taste for children. When Th’owxiya catches a hungry mouse, Kw'atel, stealing a piece of cheese, she demands two-child spirits be brought for her to eat, or else she will eat Kw'atel's whole family. Ignorant to her power yet desperate to save her family, Kw'atel sets forth on an intense journey to fulfill Th'owxiya's demand. With the help of the Sqeweqs (Raven), two Spa: the (bears), and Sasq’ets (sasquatch), Kw’at’el finds alternate gifts to appease the goddess and the journey becomes one of knowledge, understanding, and forgiveness.

Th’owxiya: The Hungry Feast Dish was written by local First Nations playwright, Joseph A. Dandurand and how the play came to be is a story itself. While Dandurand worked as an intern at the Canadian Museum of History in Quebec, he was tasked with writing scripts for the in-house theatre troupe. In the museum’s Grand Hall there sat an enormous traditional carved feast dish, eight feet long, as long as a totem pole, and it was this Tsonoqua feast dish that Dandurand saw every day as he wrote his scripts, which then inspired him to write his children's play Th'owixiya: The Hungry Feast Dish. 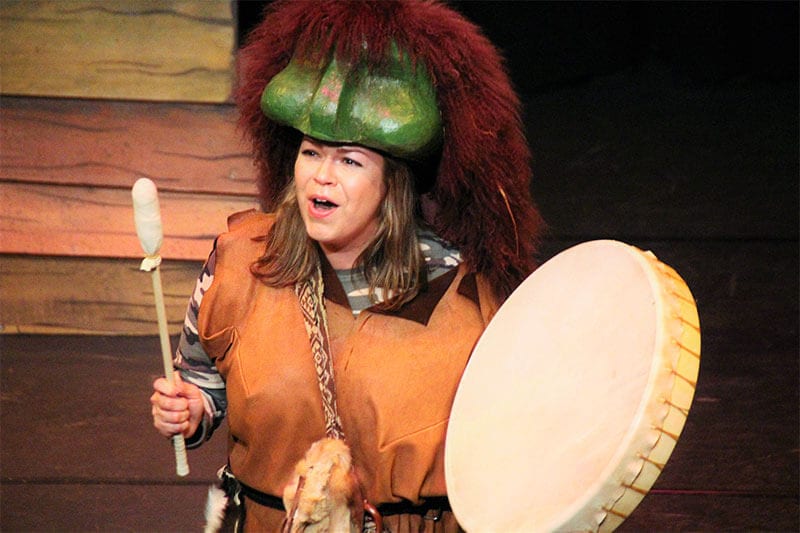 Dandurand, who has written many plays and is also a poet said the play has been extremely well-received in previous Axis Theatre Company productions. "Kids love the play and even at times join in and help the characters. I believe families like the play as it has a good message, and I think that those who come to the Surrey Arts Centre show will be left with a good feeling, the children will enjoy themselves and all will feel that they have shared in a good story." Chelsea Rose, one of the actors in the play said, "It feels amazing to be bringing this Kwantlen story to the Surrey Arts Centre. I grew up doing shows at the SAC, and being able to perform an Indigenous production there warms my heart. Th’owxiya is different from any show I've done before. It's my first show for young audiences, and the first show is done in the mask. Hearing the children calling out and getting excited about the story is thrilling, and quite comical. As Indigenous actors, we often are cast in productions that speak of our recent, and terrible history. It’s so satisfying to be able to share the laughter, and joy we have, while also teaching a lesson."

Joseph A. Dandurand is a Kwantlen Aboriginal (Xalatsep), from Kwantlen First Nation in British Columbia. He is a poet, playwright, and archaeologist. Dandurand received a Diploma in Performing Arts from Algonquin College and studied Theatre and Direction at the University of Ottawa. His produced plays include Shake, Crackers and Soup (1994), No Totem for My Story (1995), Where Two Rivers Meet (1995), and Please Don't Touch the Indians (1998) for the Red Path Theater in Chicago. He has also authored a radio script, St Mary's which was produced by CBC Radio in 1999. His latest play, Shake, was featured at the 20 th Weesageechak Begins to Dance festival of new plays in Toronto, Ontario. His poems have appeared in numerous journals and anthologies and he was the Indigenous Storyteller in Residence at Vancouver Public Library in 2019.

Axis Theatre Company is an award-winning, world-class theatre company whose productions are performed in theatres and schools, enriching curriculum, drawing children into stories and giving them access to ideas in new ways. Their 57 original works have earned 24 Jessie Richardson Awards, A Betty Mitchell Award and a Drama Desk Nomination for Unique Theatrical Experience. The theatre company came together in 1973-74 and now, over 40 years later, Axis Theatre Company continues to create original physical theatre productions for the young and young at heart.