Step back in time with Surrey Civic Theatres Screening of Ingenue

Surrey, BC—IN BRIEF: Join Surrey Civic Theatres for a screening of the musical, Ingenue. This award-winning musical written and starring Melanie Gall, is about the life of Deanna Durbin. The Digital Stage online performances and shows are designed to help people staying home to connect with the performing arts.

To Watch The Show: Click the link on Surrey Civic Theatres' Facebook Page, tune in to the Digital Stage Page, or the City of Surrey YouTube Channel

"Gall can be captivating. Her musical capabilities could sell out venues alone, and her acting skills put her on the stage with many other great talents." - Production Ottawa

Join Surrey Civic Theatres on September 3 to watch a recording of the award-wining theatre show, Ingenue. The musical celebrates the life of Deanna Durbin, "Winnipeg's Sweetheart" and her friendship with Judy Garland. Ms. Garland might be the icon and household name everyone knows today, but in the 1930s, "Winnipeg’s Sweetheart" was a far greater star. At one point, she was the highest-paid woman in the world, and Durbin was also a favorite of Franklin Roosevelt, Anne Frank, and Winston Churchill.

Ingenue tells the story of Durbin’s life after her retirement through the lens of a reporter visiting her home in Paris. The show unravels the true forgotten tale of Durbin’s lifelong friendship with Judy Garland—and the rivalry— between these two old Hollywood stars. Songs in the show include “It’s Foolish But It’s Fun”, and “Il Bacio”, but it’s Gall’s performance of “Somewhere Over the Rainbow” that gives a hint of what it might have been like if Durbin hadn’t refused the role of Dorothy in The Wizard of Oz.

The show written and starring award-winning performer and singer Melanie Gall, really was a true labour of love to create. It took Gall two years and more than 4,000 newspaper clippings from the 1930s and ‘40s to complete the show’s research. So far, Ingenue has been incredibly well received by audiences across Canada (Ottawa, Regina, Winnipeg, Calgary, Edmonton, Victoria, Vancouver Fringe Festivals) and this four and five star reviewed show also won the Orlando Fringe Festival’s Best of Venue Award, as well as the prestigious Musical Theatre Weekly Award at Australia’s Adelaide Fringe.

When the pandemic struck, the show was just about to embark on a tour of UK festivals, and now, the props and set from the show (many of which are original items from the era and were treasures found on e-bay) are being stored in a garage somewhere in the north of England. 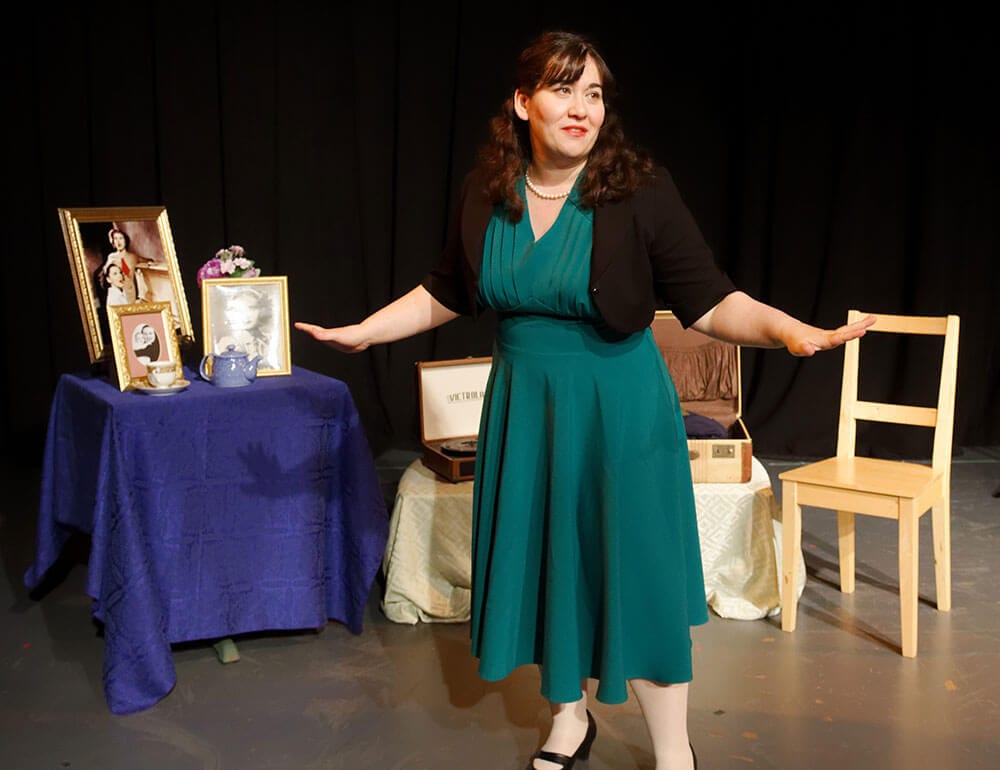 Gall, a touring professional, who has spent much of the past five years on the road, returned to her hometown of Edmonton when the pandemic broke. However, she's kept busy with virtual work—including recording a CD of Canadian songs for a prestigious Canada Day celebration in Panama. She is also busy writing a biography of Durbin, as well as a new show about the life and music of Noel Coward. Gall said she is thrilled that Surrey Civic Theatres is showing a screening of Ingenue, as it is a show with wide audience appeal that many people will enjoy.

"I tend to write historical shows about people involved in music, and I wanted to write the show about Deanna Durbin because she's Canadian, and there aren't a lot of famous Hollywood singing stars that have come out of Canada, and she was the most famous star out of Canada in the 1930s and 1940s. I had always planned to do a show about her, but then I started doing the research and said to myself, 'Oh my gosh, this person is amazing and she's been forgotten!’. People who remember Deanna Durbin, love old Hollywood, nostalgia, the history of movies and that golden era will love the show. Also, Judy Garland fans will enjoy it, as the show is about her too."

Gall says ultimately, Ingenue is a trip down memory lane to a bygone era that people won’t want to miss. “It’s hard to understand today exactly how famous she was. She was like the Beatles, the frenzy that surrounded her. Nowadays it’s easy to understate how important she was at the time. But Universal studios would have gone bankrupt and out of business had it not been for Deanna Durbin and her first two movies. If you think of all the movies that have come out of Universal studios, those would never have existed had it not been for Deanna Durbin, a thirteen-year-old girl from Winnipeg. She was an amazing girl and an amazing woman, and one of the most amazing things was that in 1949, she walked away from the all the fame and Hollywood, moved to France and lived a long and happy life.”