Surrey, BC – Surrey Art Gallery is marking twenty years of digital art programming with a group exhibit of leading digital artists in Canada titled Garden in the Machine opening Saturday, September 21 with an artists’ conversation at 6:30 p.m. and the reception to follow at 7:30 p.m. Admission is free.

In Data Mulch, Helma Sawatzky digitally stitches together dozens of photographs of a brimming compost bin at Granville Island Public Market. This market is one of Vancouver’s most celebrated sites of sustainable food and design. In addition to highlighting food waste, the artist shows how excess, accumulation, waste, and decay also mark our contemporary digital condition. As with organic waste, if people pay attention to their digital garbage, they can reclaim it to grow and harness new life and images for the future.

Using algorithms, the artist morphs these photos into ornate geometric designs. This project exemplifies how social media can be a tool for positive social change. A variation of this artwork will play on UrbanScreen this fall. 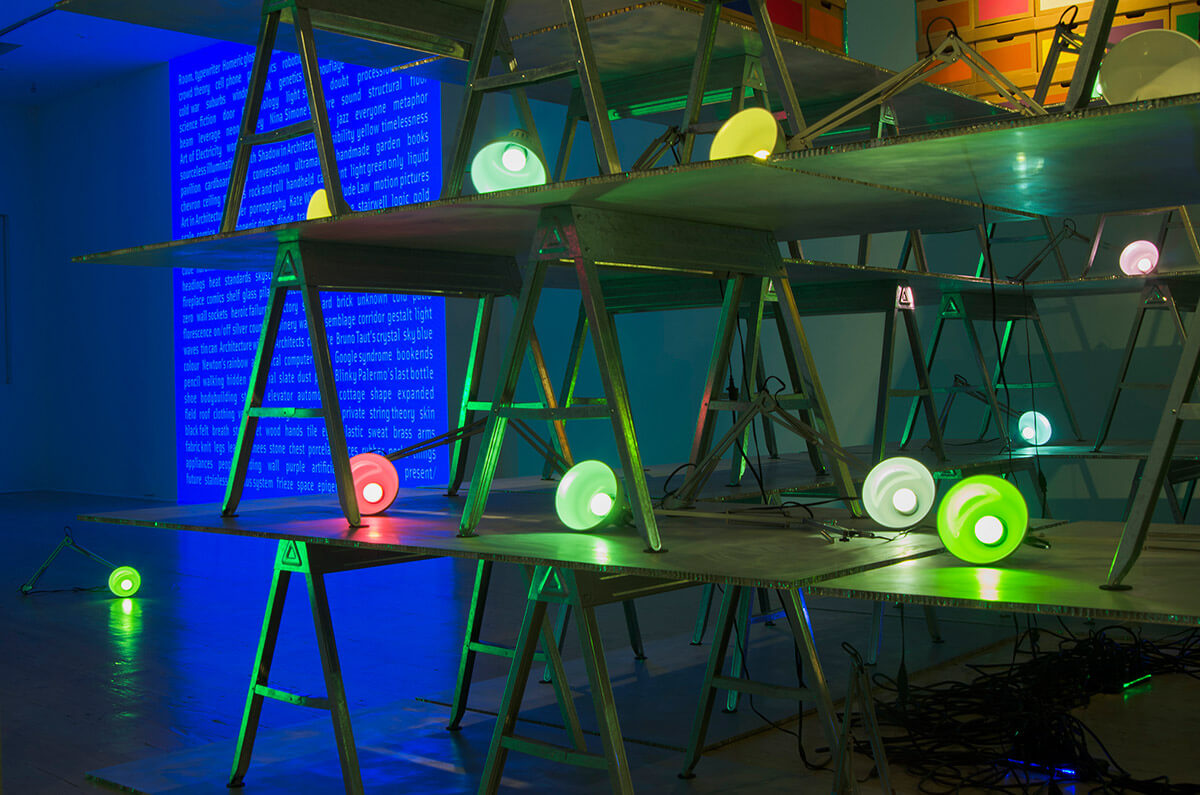 Robert Youds explores the garden in a different manner in For Everyone a Fountain. Using computer software, he translates photographs of the iconic Butchart Gardens in Victoria, British Columbia into coloured light sequences spanning the four seasons. These images appear in a tower of gleaming metal building and office materials. Youds creates a compelling space that collapses the boundaries between architecture and nature, work and leisure, image and object, utopia and dystopia.

In Unceded Territories, Paisley Smith teams up with Lawrence Paul Yuxweluptun. Their virtual reality game invites participants to move through different natural landscapes inspired by Yuxweluptun’s bold paintings of colonization in British Columbia. As people play the game, their presence leads to sinister consequences such as forest fires and oil spills.

Yuxweluptun says, “Paisley Smith and I have made Unceded Territories to force audiences to rec­ognize their role in the destruction of the environment by having them embody the greedy, Super Predator. Are we that different than the pipeline executives sacrificing mother earth for their own wealth? We want you to think about these things, to feel our anger, and to fight for change.” The VR component of this installation is available for public viewing Thursdays between 3 p.m. and 7 p.m.

On a similar note, Leila Sujir’s Forest Breath highlights nature as a space of spiritual connection and renewal that needs protection. She uses stereoscopic 3D video to show a section of dense woodland on Canada’s West Coast that is under threat of deforestation. The ethereal imagery encourages viewers to reflect on old-growth forests in relationship to cultural history, personal health, and mortality. 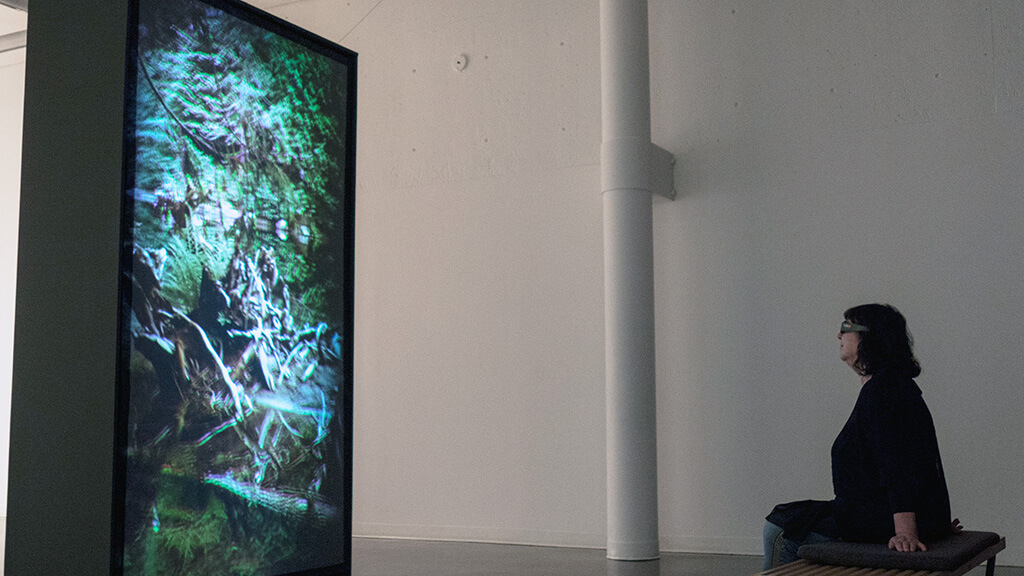 “Change, growth, and mutation are at the centre of this exhibit,” says Surrey Art Gallery curator Jordan Strom. “These themes connect to the evolution of our TechLab since its launch in 1999. This Surrey Art Gallery program has showcased experimental art practices from robotic drawing machines to aerial drone videos, interactive sculpture to new forms of virtual reality. We’re excited to honour this milestone with an exhibition that features several of Canada’s emerging and internationally recognized digital artists.”

On Wednesday, October 16 from 7 to 8:30 p.m., join Surrey Art Gallery curator Jordan Strom for a free exhibition tour to learn more about the digital works in Garden in the Machine. On Saturday, October 26 from 2:30 to 4 p.m., Lawrence Paul Yuxweluptun and Paisley Smith discuss their virtual reality collaboration Unceded Territories at their free artists’ talk. Attendees are encouraged to visit the VR artwork in the Gallery before and after the event. 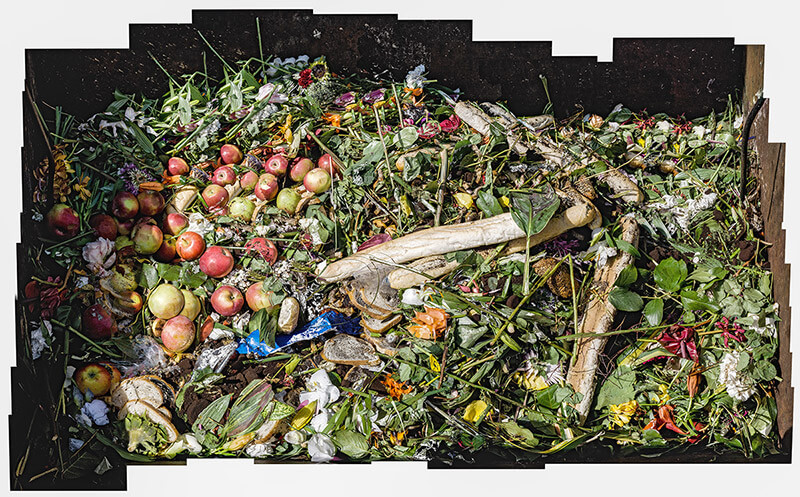 Faisal Anwar is an interactive new media artist from Pakistan and now based in Canada. His projects often bring together art, culture, and technology in an odd configuration to explore our perceptions towards private verses public spaces, surveillance and social interactivity in modern urban cultures.

Anwar is a graduate of the Canadian Film Centre's Habitat-LAB Interactive Arts and Entertainment Program in 2004. He completed his Bachelors in Graphic Design from the National College of Arts in Pakistan 1996. His media installations have been exhibited across Canada and the world.

Helma Sawatzky is a Surrey-based artist, graphic designer, and musician. Her photographic art practice is informed by both an enchantment and concern for the increasing presence of the screen and the various forms of digital meditation in daily life experiences. She also explores the impacts of consumer culture on the environment.

Her work has been previously exhibited at Surrey Art Gallery in the group exhibition Views from the Southbank. She received a BFA in Visual Arts and Photography from Emily Carr University of Art and Design in 2009 and teaches at Trinity Western University.

Paisley Smith is a Canadian filmmaker and virtual reality creator based in Los Angeles and Vancouver. She uses interactive technology to tell important stories that need to be felt and experienced. Smith is the recipient of the 2018 Sundance Institute and Robert Rauschenberg Foundation Fellowship for Unceded Territories, with support from Creative B.C.

She holds an MFA from the University of Southern California’s School of Cinematic Arts, which she attended on a Fulbright scholarship. She received her Bachelor of Arts Honours in Film and Media Studies and Art History from Queen’s University in Kingston, Ontario.

Leila Sujir is an artist and associate professor at Concordia University in the Intermedia (Video, Performance, Electronic Arts) area, where she is also Chair of the Studio Arts Department. Over the last thirty years, Sujir has built a body of video installation artworks using a mix of fiction, fantasy, and documentary with visual and audio collage techniques. She explores migration, immigration, nation, and culture. Her works have been shown in galleries and festivals over the world.

Robert Youds makes artworks that challenge our everyday perceptual experience of objects, images, and things. Originally trained as a painter, he calls his work “structures” that blur the lines between architecture, design, painting, sculpture, and photography. Youds’s artworks are foremost an aesthetic system towards a mini-utopic condition – a better world.

He completed his MFA from York University in 1982 and his artworks have been exhibited in major public institutions nationally and internationally. He’s a Professor of Visual Arts at the University of Victoria.

Lawrence Paul Yuxweluptun is a painter, sculptor, and advocate for contemporary Indigenous issues in Canada. Of Coast Salish descent, he graduated from the Emily Carr School of Art and Design in 1983 and makes large-scale paintings using Coast Salish cosmology, Northwest Coast formal design elements, and the Western landscape tradition.

Art is a way to voice his political concerns, exposing environmental destruction and the struggle of Native peo­ple. Yuxweluptun's work has been included in numerous international group and solo exhibitions. He was the recipient of the Vancouver Institute for the Visual Arts (VIVA) award in 1998.

Internationally recognized for its award-winning programs, Surrey Art Gallery, located at 13750 88 Avenue in Surrey, is the second largest public art museum in Metro Vancouver. Founded in 1975, the Gallery presents contemporary art by local, national, and international artists, including digital and audio art.

Its extensive public programs for children through to adults aim to engage the public in an ongoing conversation about issues and ideas that affect our communities and to provide opportunities to interact with artists and the artistic process. Admission is free. Surrey Art Gallery gratefully acknowledges the financial assistance of the City of Surrey, Province of BC through BC Arts Council, Canada Council for the Arts, and the Surrey Art Gallery Association.