One of India’s most distinguished and cherished figures is arriving in Metro Vancouver to assist the Rotary Club of Surrey-Newton in its ongoing charitable work.

Milkha Singh (The Flying Sikh) is one of India’s greatest athletes, competing in Track and Field in the 200m and 400m between 1955 and 1964.  He is a 3-time Olympian and a Gold Medalist at the Commonwealth and Asian games.

“Hard work, will power, and determination.  For a person with these qualities, the sky is the limit”, says Milkha Singh.

As a 12-year old, Milkha Singh witnessed the murder of his parents, brother and two sisters, during the partition of India and Pakistan in 1947.  As an orphan, Milkha Singh traveled alone and with no money, from Pakistan to Delhi, to live with his older sister.  Years later, he would join the Indian army and discover his hidden talent for athletics. 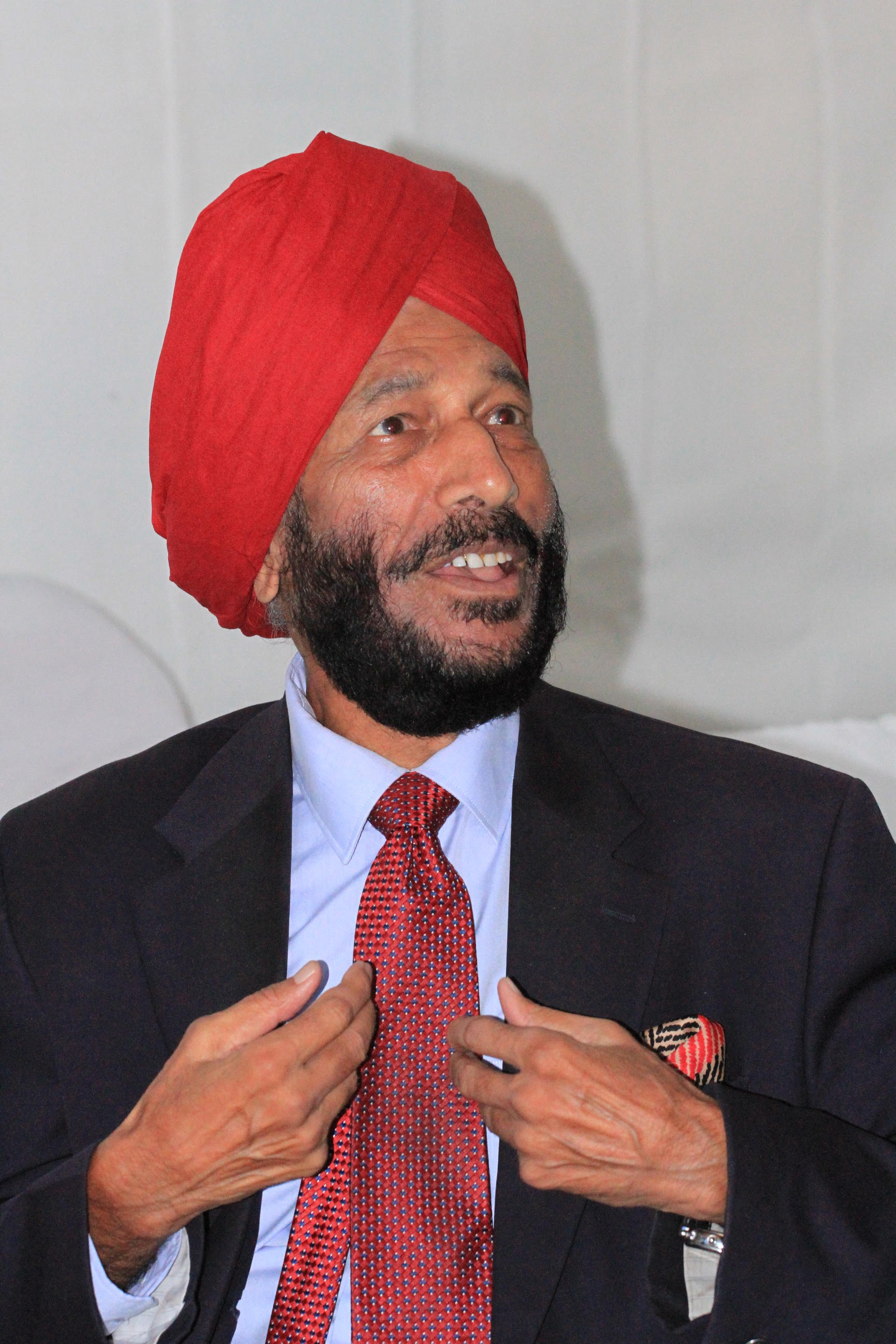 Milkha Singh also gives generously to charity.  He sold the rights to his story for 1 Indian Rupee ($0.02 CAD) as long as a share of the profits from the film went to the Milkha Singh Charitable Fund, helping aspiring athletes living in poverty.  It is for this reason he has arrived in Metro Vancouver, to assist the Rotary Club of Surrey-Newton to raise funds for its multiple charitable activities locally and internationally.  But more importantly, Milkha Singh is hoping his story will inspire young people to achieve their dreams.

“If I can inspire even one youngster to be the best in the world in whatever she or he does, I would consider my trip to Canada at this age, successful”, says Milkha Singh. “The respect of your country, and in this case Canada, is most important.  Do your best to make your country proud.”

He will be speaking at a special fundraiser on Saturday April 9th, called “Ordinary people with extraordinary stories”.

Milkha Singh is scheduled to arrive in Vancouver on Thursday, April 7.

Newton Days is bringing back the Summer Fun!

Let’s kick-off summer in Newton! The Newton BIA is bringing back Newton days with events all summer. Complete with a farms’ market, kid fun zone, face painting, food trucks, henna and Science World demonstrations, Newton Days has something for everyone.

Throughout July and August, Newton Days will be taking over the Newton Grove on Saturdays from 12-4pm. Open to the community, everything will be free! Each Saturday will feature something different, so be sure to keep an eye on our Facebook events for more details.

Newton Days is a push to create a more vibrant community within the Newton Town Centre. Get out, enjoy the weather, enjoy the activities, and get to know your neighborhood! Positive events like these in the community are key to the success of Newton and will be more successful with your support!

Groundhog Day in Newton returns for the third year of fun. Prepare for a chilling day filled with activities, treats, and live entertainment! Groundhog Day will be taking place in the Newton Grove, next to the Bus loop. Start the day with a free pancake breakfast courtesy by the Surrey RCMP; visit the crafts and games section for some fun activities provided by the Newton Community Centre. And right beside there is the Friends of the Grove tent with free hot chocolate and cupcakes, and while there why not learn a little more about these active community change-makers!

What’s an event without music right? Join Lou Jack and Ginalina as we dance away the cold; and end the day with a special Groundhog themed performance by the Surrey Dance Company and Lou Jack’s prediction! Will we have 6 more weeks of winter, or an early spring?

Groundhog Day is back for another day not to be missed. The event takes place on Saturday, January 28th from 10am-12pm. Come in your pajamas and bring the whole family out for a morning filled with free activities, treats, pancakes, and entertainment.

See you there! And take a look back at Groundhog Day 2016!

About Ginalina
Ginalina is a Juno nominated and bilingual folk singer-songwriter for children and families. She is passionate about finding beauty in the ordinary moments and connecting people, one fun song at a time. Her music and videos can be found on CBC Kids’ Radio stream and Knowledge Network Television.

Her music is energetic and fun, sweet and sentimental, with an array of bluegrass, country, zydeco, modern folk, and west coast styles. Ginalina’s live shows are playful and musically entertaining and engaging, and her catchy songs and actions get children and adults of all ages laughing, roaring, singing, jumping, and clapping! For more info, visit www.ginalina.com.

Beginning its artistic journey in celebration of the 2010 WINTER OLYMPIC GAMES at Holland Park, The SCDT has since performed for hundreds of audiences across BC.

Each unique dancer performs at a professional level in their chosen dance aesthetic. As artists in residence at the Thrive Dance Studio and Dance Xpressions, the organization is able to foster diversity in dance as a performing art-Bringing together the community and industry professionals in Surrey and across the lower mainland. For more info, visit http://www.surreydancecompany.com.

For Donna Chubb, the Manager of Community Thrift Store, it has always been in her nature to give back. She credits her giving nature to her parents who were passionate about community. Through a combination of passion for volunteering and experience in retail management, Donna and the staff are responsible for the success and growth of the store. Store profits support the Surrey Hospice Society and the Surrey Fire Fighters Charitable Society.

Newton plays a large role in both the business and Donna’s life. Newton is Community Thrift Store’s only location and is where they have thrived for over 11 years. Donna believes there is a need in Newton for this type of store specializing in quality and affordable thrift goods. Also, Donna connects to Newton at a personal level as her grandparents lived in Newton and her mother grew up here. Newton continues to be a part of her life.

The Community Thrift Store prides themselves on their “consignment quality” products which is evident in the Boutique Section. They look for items that are good quality and items in nearly every category can be found in the store. As a result, this allows them to stay competitive with other thrift stores in the area while simultaneously offering affordable pricing.
Donna attributes much of the business’s growth to her employees and volunteers who consistently provide excellent customer service. The store’s small size allows them to build relationships with customers, knowing many on a first-name basis.  Donna’s staff and volunteers are “caring, honest and fun people who enjoy giving back.” These are only some of the qualities that she believes a volunteer requires and this is why the Community Thrift Store has a diverse group of volunteers from the ages of 16-86. As a result, they have jobs for everyone regardless of their physical or mental abilities, as Donna states, “Volunteers are the greatest asset”.

Contributing to the local community is a huge part of the Community Thrift Store. In addition to supporting the Surrey Hospice Society and the Surrey Fire Fighters Charitable Society, they also help community members. They offer free items for the homeless providing them with a safe place free of judgement. And community agencies can find practicum placements for clients and students can earn volunteer hours at the store.

Donna and the store have high hopes for Newton. They hope to see it become a vibrant location where people can feel comfortable shopping. Newton is a great location for the store and the community here supports them. Although they may open another location in the future, Donna maintains that this store will always be here in Newton.

The Community Thrift Store is holding their most anticipated event of the year, ‘Night on the Town’ on November 25th from 6-9 pm. The event is extremely popular with customers and their ninth one this year. Christmas decorations fill the store and the best holiday wear is on display for the event. Because Night on the Town has large ques, be sure to line up early! Donna, staff, and volunteers can’t wait to see you come by and have a look at this little gem of a store. You will be amazed at what they have.

Merchant Shout-Out is a monthly Newton BIA program highlighting one business per month within the Newton Town Centre. Tune in every month to hear a new business story! And visit our website for past stories.

Every movement starts with a passionate few that drive change in their neighborhood. It is Newton’s time to take back its streets and galvanize the community by taking ownership of the future to ensure long term vibrancy and optimism for the area. The Newton BIA has adopted streets through the Surrey Adopt-A-Street program within the BIA boundary in part to take back the streets. Taking ownership of our streets within the town centre is a step towards the revitalization and success of Newton. This monthly walk is a positive event bringing the community together from residents, businesses, stakeholders, and government. Collaboration is vital to the success of any community.

Join us Friday, November 4 at McDonald’s located on 72 Ave near King George at 9 am and get involved in your community! We will be walking the streets, picking up garbage, and conversing about all things Newton. Join us for some community building and end off with treats provided by McDonald’s. Be the change in your community!

Attire is based on weather. Closed toe shoes are recommended.

Spooktacular Newton returns this year for another spook filled day. Prepare for a chilling day filled with activities, trick-or-treating, and entertainment! In its inaugural year, Spooktacular was a great success with an attendance of 3000 trick-or-treaters! The event was received with great enthusiasm, so continuing the event was only natural. Newton lacks great marquee events and Spooktacular can fill that void as an event residents can look forward to annually.

many activities to stop by at along your way. Take a pic at the photo booth for a free souvenir of the event and definitely take advantage of the props to spookify your photo. Then take a stroll over to the crafts and games section for some fun activities provided by the Newton Community Centre. And right beside there is the spook theatre if you dare to be frightened, be sure not to spill all your popcorn when you’re jolted with fear! What’s an event without music? Not so good, so make sure to stop by the DJ booth for some Halloween tunes to shake to, and be aware of surprise thriller dance offs throughout the day! Sounds like enough? We think not! Take a ride on the haunted train and walk on over to the

petting zoo! Hungry? Stop by one of the food trucks or by some of the many nearby restaurants for a bite. And before going home, take a walk through the pumpkin patch! Pick out a pumpkin, but be sure to choose one that will make the best Jack-o-Lantern, and drop a small donation off at the Surrey Food Bank tent!

Spooktacular Newton is back for another day not to be missed. The event takes place on Saturday, October 22nd from 12pm-4pm. Dress up in your finest costume and bring the whole family out for a day filled with many free activities, trick-or-treating, pumpkins, and entertainment. See you there!